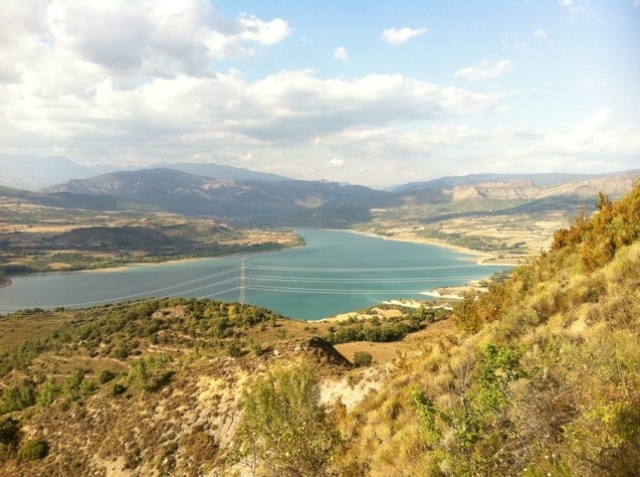 The lake, oh yes the lake. Quite a walk.

To get here, the day looked fantastic in Ager and I’d ran out of excuses – after an encounter with a scary looking cloud I booted off downwind, finally landing in very dry country and to cut a long story short with a combination of walking along dusty roads in the hot sun and going through my water very quickly, a not worth the wait flight, and being misinformed by a sign with a 60% underestimated walk time, I finally drank my fill at a village after dark and lay down late by a lake to sleep. Not such a short story but I did get it into one sentence somehow.

The next day I started with a pleasant walk along the last part of the lake to La Pobla de Segur where I grabbed some food before hitching with a local Spanish bloke from the nearby Valle de Boi. He had driven that same caratera for 30 years and we had a good old conversation in Spanish, at one point I thanked him, gracias por habla despacio! He went a few km out of his way to drop me to a junction where I got my next lift into Castejon. This time it was a young couple from Granada off to Benasque for an outdoors oriented holiday out of the southern heat. Hitching continues to be brilliant and I arrived in time to take the shuttle to launch from the local paragliding shop which kindly gave me a map.
At around 2pm I launched into epic conditions, nice smooth climbs under big sucking clouds. Climbs were nice and closely spaced and I made quick progress to the east, using bar and big ears at times and even a B line stall to get out of the clouds which were only 2800m, ok that’s high but actually not much higher than launch and there wasn’t a lot of wiggle room between them and the mountains.
After a relatively long transition I found myself on the wrong side of a valley wind, turned back to claim a leeside spur thermal from a bird but landed shortly afterward. Probably partly because it was a bit full on flying with the “low” cloud, and all the time the lush smooth green grassy slopes were beckoning, perfect vol biv terrain.

An hour or two later after a short walk upwind I reflew, holding on with barely any penetration while the sun did it’s business, paying off shortly afterwards with the mountain range spread out underneath and in front of me. Around 6pm now base was higher and I cruised off towards the border. The mountains became bigger and the terrain rocky with alpine lakes. It was (to borrow Bryan’s words) champagne soaring!
My map analysis had me out by one valley, as I noticed the dam (Estany de Llauset) where we finished our Pyrenees trip two months ago was to my left! It was quite cool to recognise where I was and “feel at home” in these mountains.
Reaching the head of the valley with ease I cruised around to the shady eastern facing side, intending to fly back the next day. Spotting an alpine hut that I think had been plonked there just for me (it was erected this month!) I landed and after a pleasant ten minute walk I was there.

The next morning I climbed the nearby 3000m peak and got some great views of Aneto. Well, most of it – the peak was obscured by roll cloud, with wind gusts prompting me to hurry back to the hut and launch before it was too late.

Views of (most of) Aneto alongside Tempestada which Alex and I climbed in June.

Perhaps I could have waited a little longer but I got myself a sleddie to the tunnel entrance, before hitching with a Spanish family returning to their home in the adjacent Valle de Boi after a holiday in the Basque country. I disembarked after seeing a paraglider land, but unfortunately spent too long buying and eating nectarines to catch him, so I walked up the hill on my own. Anyway I knew he’d flown early to avoid the valley wind which is strong here.

Many hours later I reached another perfect launching spot, well if it wasn’t completely blown out. Tired after the walk and one could say tragically demoralised after losing a plugger (thong, jandal, flip-flop), I lay defeated but content in the grass. An hour later I was a little shocked to see two Paragliders, climbing, just a little higher on my peak! Not only that but soon enough they took off on glide! Well. I suppose I better man up then and set off after them!!!

Another epic parawaiting spot, to watch Brad and Oriel sail past!

Within the minute I was back at the top of the launch. It was absolutely howling!!! I suppossed I’d better head higher up the hill and around the corner and out of this wind! By now it was 7pm and I flew, it was mild but you knew the wind was there, just around the corner. Unfortunately the clouds were dying away though and the day was about finished. I wondered how far my “friends” had flown by now (I would later find out – as it turns out it was Brad and Oriel, who I met up with two days later!!).

With the last light of the day I pushed higher up to get in front of the valley wind and soar across a higher valley, pushing out to the east. Yes with the favourable conditions of the previous day fresh in my mind I had an idea in my head to push past Andorra and into France!
After sunset I gave up the fight and settled down for the night. The full moon was waning now and during the night I noticed a wind spring up, and clouds blow in. It was weak but instability had arrived – this wasnt supposed to happen. Only a light shower or two before dawn, but when I heard thunder to the west I decided to pack up quick smart. The morning downpour was not an issue as I was already on my way, traversing around the valley. By the time I climbed up to a rocky ridgeline the sky was totally blue again and flying was back on the agenda. I waited an hour in the warm sun though as it was still early. 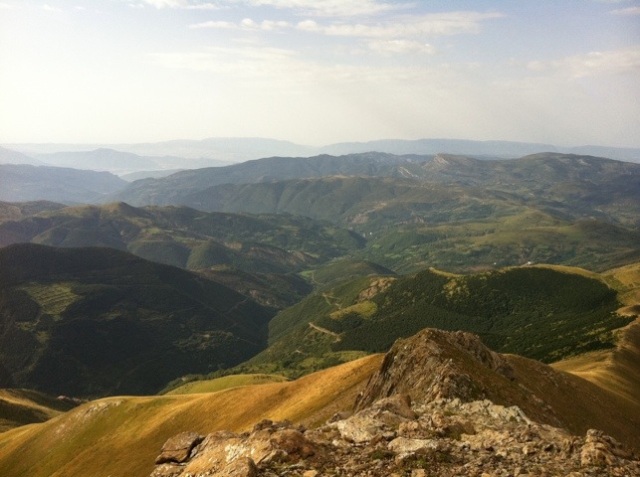 Great views out as far as Ager once the rain had cleared the air.

Finally I flew but with a short break on the slope it was two short flights downhill. Down, but not out – I was stuck deep in a tight gorgy valley, complete with powerlines. Out of nowhere some large raindrops sprinkled over my gear, I’d only just put the glider in the bag! A long walk ensued. Luckily however I was rescued (whilst contemplating a low yield glide to a small and tree surrounded paddock intercepted by powerlines) by the only passing car – a family from Barcelona who brought me to La Pobla de Segur. I told them i still had the paper wrappings from that towns bakery!

I enjoyed some Tapas while noting on facebook that Brad and Matt were in Castejon. Half way between there and Ager, I’d preferred to go there anyway, although there was a train to Ager. So I hitched – another smooth passage. First an Italian whose accent reminded me of Carl’s lavish Mama Mia impersonations, maybe it is shared by expats too! Second a young guy who I had a good chat to, yes Spanish again, and finally another family from Barcelona. This time I had a short reprieve from Spanish as their son practiced his English instead.

Finally I met up with the guys in Castejon and after a leisurely morning we drove up to the low launch. We all flew but after half an hour scratching I drifted downwards, landing in town. Perhaps I felt a little sorry for myself – I bought myself a litre of ice-cream! In fact, as I explained to the other pilot I shared a lift up the hill with, I’d been thinking of this for a long time! I even inadvertently paid for one a couple of days earlier, but did not get to enjoy it – a most annoying mishap that I could happily explain in detail… Anyway…
So up for a refly, from the high launch this time, and I was enjoying the air. Things got better – after patiently working the main spur I took the highest thermal of my life. From over 4000 metres I had brilliant views of Aneto. With mixed feelings though and groundspeed of 70km I turned around and enjoyed a nice late afternoon boat around the valley. SOFT! 🙂 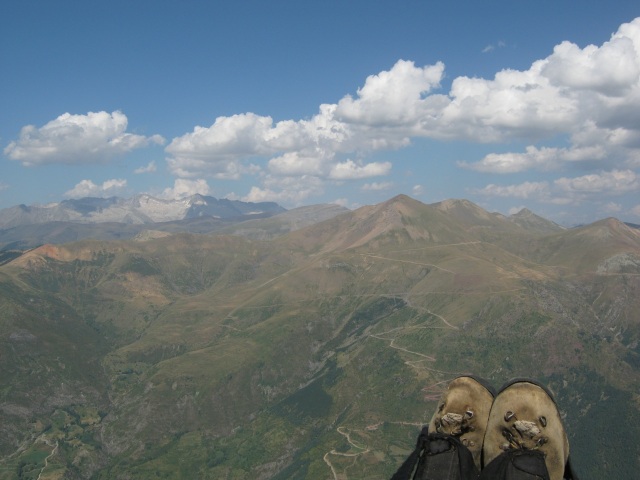