Flying in Corsica, an anecdotal analysis

Corsica, the mountain rising out of the Mediterranean, has given me some very memorable flights in a special place. I didn’t come to clock up air time or fly distance. During my ten day late April visit it rained nearly every day. In the high mountains where I like to fly there are very few options for landing, so it isn’t an easy place to fly. But there is some amazing scenery to be seen. As I recall my five flights I’ll discuss a few thoughts I had on the weather – noting that my experience in spring may not be representative at all – but that’s weather. 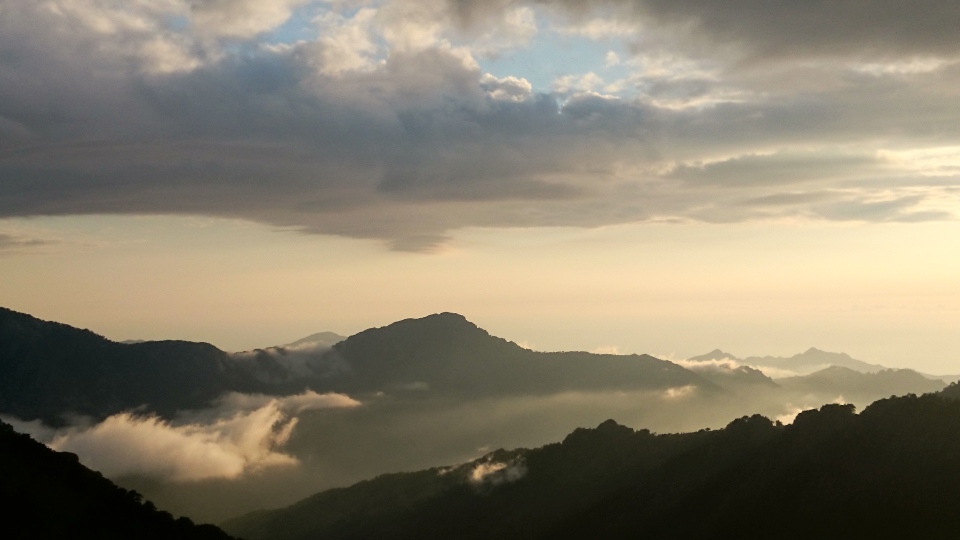 Corsica is known for the GR20, a long distance walking trail that traverses the main mountain chain. It is also known for an incredibly busy summer tourist season. At this time of year (the last ten days of April) most walkers have been scared off by the snow. There are rumours of metres of the stuff, a cold hell. But of course there are always ways around these things. For me snow makes a good place to land, and providing it could get cold enough I could make fast progress with my new micro spikes. But one of the main difficulties of flying here is the humid air mass. The night I arrived there was light rain. Early the next morning roll clouds were forming on the hills behind Bastia. By lunch it was overcast with a bank of thickening stratocumulus, and I was in no rush to get to the start of the GR20. I hoped to climb above the clouds, and this I did the following day – but of course there were yet more layers of cloud above.
An afternoon lazing around waiting for the weather is much easier to do in beautiful mountains you’re seeing for the first time than your tired old local paragliding launch. Later in the evening I left my overnight gear at the hut and walked up for an opportunistic flight (thinking of maybe soaring cliffs before landing on the spur by the hut?), until turned back by light rain – no great loss. 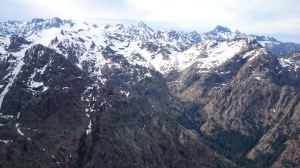 The following day had claggy mid level murk as well as stratocumulus developing below. It looked like there were no landings. But there must be a landing, somewhere, I only need a little patch! (As it turned out a steep rocky slab was the best on offer – no thanks.) Knowing I might lose my window to fly though I decided that flying all the way to sea level (to the nearest grass!) would still be nice, even if I had to climb up again it was better than descending into the cirque.

So my first flight was spectacular, and even though the stratocumulus didn’t pan out to eight octas as feared (but instead began to develop over the ridges) I think it was the right option. I thermalled underneath it, popped though a pass, then had slight regrets about not trying to fly to the beach!
It continued to overdevelop over the high mountains and (after hitch hiking) i felt a few spots of rain before ascending back into the cloud.

Reaching the pass (divide) i was happy to note that the other side of the convergence was dominant and drier. You could see cloud base get higher and higher as the mountains rose from the sea. I just had to wait until the right moment in the evening, when the cloud had decayed enough to let in the sun but the heating was still sufficient to work the cliffs. After a committing glide i worked the smallest features just moments away from having to slope land by the hut (the valley below was full of trees). It was extremely rewarding to work up enough height to cross to the bigger cliffs opposite, and finally to get some real height as wispy cloud formed around me. The beautiful colours of the rock are in my memory as the flying was too intense for photos. Eyeing up the scree slopes behind i plucked up the courage to cross again, but there was nothing to worry about as these slopes worked as well and soon I was nudged up against the pass. Cloud base was rising slowly but I was running out of daylight so I landed on the snow beneath the pass before a magic evening walk to the hut back on the GR20. A very special day.

The next morning cumulus lingered over the ocean far below, but up above was clear. I had time to climb a prominent mountain (Paglia Orba 2525m) to survey the scene. It’s always surprising how little wind there can be on the tops when you see the wind drift of the clouds – thermals were rising up beneath me. 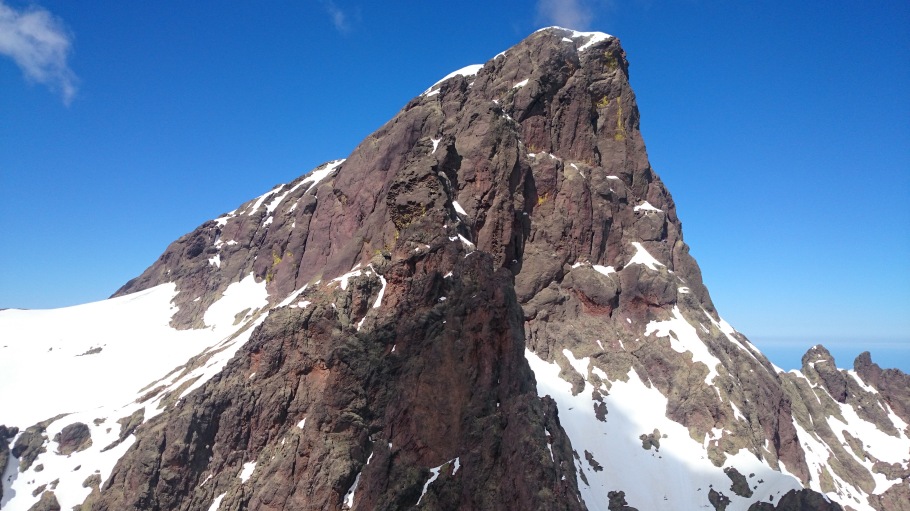 Thankfully the valley leading to the interior has an abundance of landings, in contrast to its neighbours. Soon after launching from the top edge of a snow patch I climbed the massive south east facing spur of pure rock. Gliding towards Monte Cinto I fell on the leeward of the northerly so i had the privilege (out of necessity) of repeating the climb up Paglia Orba. Then I continued down the valley, eventually reaching the next crux. Soaring a rocky spine I needed a lot of height to even consider crossing the gorge ahead. It took me ages to commit to diving deeper into the mountains, back into the higher spur. Of course it worked, and anyway the slope below was all landable (with care). But after this the area was flushed by an increasingly belligerent north wind. Anyway I managed to get up and tentatively continued toward the gorge, deciding to continue after a favorable glide. Flying slow now I took every bit of lift, admiring the waterfalls and rock pools below.

From the gorge looking north

From the gorge looking back to launch

With plenty of height now, or so I thought, I made a final push toward the main central valley of Corsica. Enroute alarmingly strong winds pushed me back toward the gorge. I’m not sure I’ve ever been so grateful to have full speed bar available when so high. Squeaking around the corner it was easy progress to the main central town of Corte. Needing supplies and noting overdevelopment and heavy rain over the main divide, not to mention rather narrow valleys down wind, I decided to land in Corte. That took some time with my height and the abundance of lift.

My afternoon train journey was an eye opener – trees, hills, gorges, and I’m not sure you can fly here! Reaching Col de Vizzavona heavy rain had just finished, and as a logical convergence between east and west I’m quite confident this is a regular occurrence.

The forecast for the next day was the best yet, but I was a victim of this convergence. While it may have been flyable elsewhere cloud base wasn’t inspiring so I was happy to rest until evening. Finally the cloud died away and i ridge soared in light lift to the top of the mountain. I would have liked to stay but it was beginning to become very dark. Crossing the valley I surveyed another incredible tributary steam winding its way past enormous rocky spires. Luckily the adjacent ridge was less extreme and I could top land. 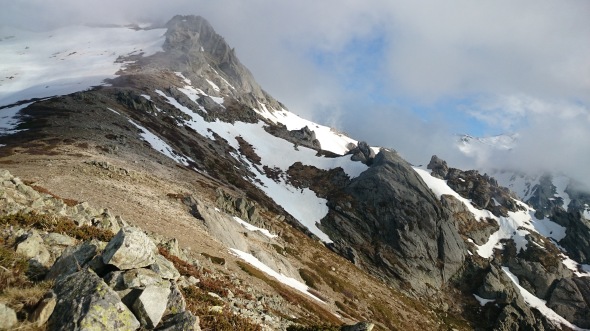 My fifth and final flight was the following day. At the pass on the GR20 near Monte d’Oro i noted partial clearing of the pervasive cumulus and decided to climb higher rather than descend. It was ridge soarable and landable on both sides so the idea was to launch when possible (steep and rocky so not trivial) and then pass though the pass (into lee), and over another (lower) pass when the clouds or temporary lack thereof allowed. Thankfully it worked. 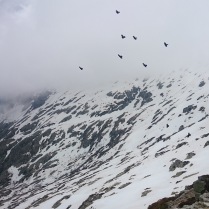 Ok time to pack up!

So all in all it was very interesting: flying, problem solving, optimising, and scenery.

Nick Neynens
View all posts by sharemyjoys →
This entry was posted in Uncategorized and tagged adventure, paragliding, parapente, vol biv. Bookmark the permalink.

4 Responses to Flying in Corsica, an anecdotal analysis