The objective is to get a good deal on the best wing available – for the purposes of the 2017 edition of the Red Bull X-Alps, and vol biv thereafter. As such I need to be confident on the wing, it needs to be suitable for a wide range of conditions and situations, and it should be a joy to fly. 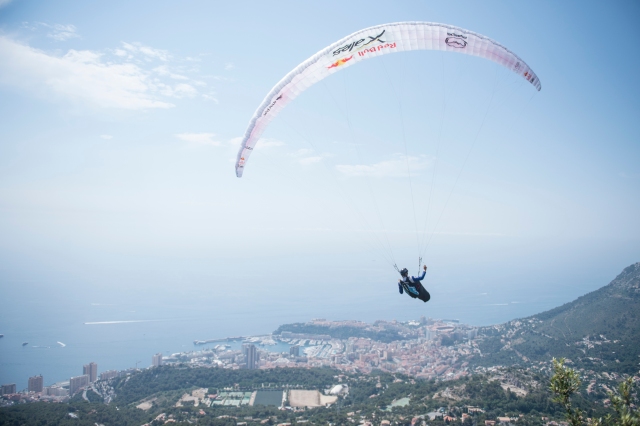 I’ve always been a bit sluggish to upgrade wings, having flown my school wing (EN-A equivalent) the GIN Bolero+ for two years, then the Gradient Montana (EN-B equivalent), along with some second hand wings for everyday flying, until buying the Ozone LM5 in late 2013, which I have now flown for over three years. The LM5 was my first EN-D and I moved up after spending a year in Antarctica (not flying). I think that actively piloted it is the safest wing I have ever flown – I feel I have more feeling and control and the performance helps keep you out of trouble. The EN rating reflects on how the wing behaves in artificial conditions without correct pilot input, but in real conditions every situation has given me more confidence in the LM5. The caveat is the higher aspect ratio and cravats, as I discovered on my recent reserve throw.

I have not flown a two liner so my impression is based on that of others. They are a new development and the main problem is that while they do not collapse very often, they can be different beasts to get flying again when they do. The Ozone Zeno however, as far as I’ve heard, is comparatively easy to fly and I have not heard of any inflight incidents. Could it be that the wing design has matured, but the two-line stigma lives on?

Safety is a prime consideration, and one that has a question mark over it for the Zeno, but I do not know of any evidence to justify this. There is a school of thought that one should always fly a safer wing for the xalps than the wing you usually fly. Superficially this makes sense but when I think about the type of flying I do, predominantly solo vol bivouac in potentially marginal conditions and often in remote areas, it actually makes more sense to try anything new while fully supported, closely watched, and in a country with fully developed infrastructure. So you could say that the xalps is training for vol biv.

Performance is another critical factor. All else being equal, more performance gives you an increased safety margin. Glide performance gets you higher on transitions and arriving with just enough height to squeak through a col happens way more frequently than you’d expect, at least the way I like to fly. Speed makes a difference when pushing into headwind. But what people are all talking about is the Zeno’s ability to efficiently retain energy in weak or scrappy conditions. This would be an amazing attribute if you want to surf along the tops and ridges without topping up in thermals, which again is one of my favourite types of flying. It also might come in handy when working the scraps in the lee before crossing the mountain range. It’s tricky to assess performance because it’s like racing in between traffic lights – sometimes you get away and sometimes it makes no difference.

Handling is what I most appreciated about moving from the Bolero+ to the Montana. While at first the LM5 seemed boring compared to the Aspen3, when I went back to the Aspen3 recently I realised it really is a slow boat – notably I did choose a smaller size for the LM5 the second time around. I am really looking forward to the direct two-liner handling. I want to have wing that is poised on the edge of my fingertips. I want it to be nice to fly – it needs to generate enough excitement to keep me awake in weak conditions when I’m fatigued. In strong air I am not worried about fatigue, there is enough happening to keep me wide awake. Aside from inappropriate confidence levels, I’ve found that accidents happen when I am not attentive or engaged. When the air is rough I am very focused.

Aside from performance in the air, taking off and landing is a fundamental skill for the xalps. The zeno is a two-liner but I could hardly feel the difference when kiting it. I do not ground handle as much as I used to but I still have the skills and I can’t see the zeno being a problem. As for less passive safety, such as mushing it in to land in difficult conditions, I never really saw this as a good idea anyway and I have always tried to maintain a high standard of technique. In Annecy at the Planfait turn point I made a few passes before top landing but I made sure it all went perfectly. We’ll see if the easy handling of the LM5 has spoilt me, but so far I am looking forward to bringing the zeno into the air.

Finally there are the times when you have to carry the wing. The Zeno is a little heavier, but the difference in weight is not significant and I can handle that. More importantly is the bulk factor, and the need for it to be packed neatly to preserve the stiffeners. However I think that I have always packed my wings very carefully, and their lifetimes have been testament to this. So again I think this will not be an issue for me. In vol biv the extra bulk makes a difference but the weight is insignificant when compared to clothing and food, for example.

I would say we had good weather in Red Bull X-Alps 2015, as there was only one day I didn’t fly, and I probably should have. But many pilots complained of the rough and windy conditions. As an exercise I’ve re-examined each day to identify if wing selection was a factor.

In summary, it can be difficult to attribute success or failure to performance, but there is a few times where I felt it might have made a difference. I definitely credit this as an important factor behind my improved flying in recent years.
The biggest factor behind good flying is to make good decisions, and for that you need to have a good level of confidence. It’s important that you enjoy the experience and I’d like to say that the wing I fly for xalps would be the same wing that I’d take for a vol biv.

I have no reason to doubt that I’ll be confident with and love flying the zeno. But I have not had the personal experience to prove this point. I am relying on the fact that I will love it from the outset, in the same way that I started flying and went onto new wings in the past. The xalps has inadvertently become the testing ground for the new wing, where I can compare impressions with other pilots and we will all see what happens. Maybe distracting myself with a new toy will help me rein it in a bit for the first few days before I go out on my own.

Nick Neynens
View all posts by sharemyjoys →
This entry was posted in Uncategorized and tagged flying, paragliding, parapente. Bookmark the permalink.

5 Responses to Choosing a new wing