Right now in the lead up to the 2017 Red Bull X-Alps, my facebook feed is starting to get busy with posts from athletes reconnoitring the new route. Most are heading over early to get several weeks of flying under their belt. Myself I’m arriving only days before the latest allowed arrival, and I have never flown the (z-alps, or zeno) wing I’ve selected to fly for the race – hopefully it will arrive from Ozone soon! As Honza (past USA competitor and meteorologist) says, “you can’t brute force your way through the xalps, you have to think your way through” – there are many ways I can prepare myself mentally. 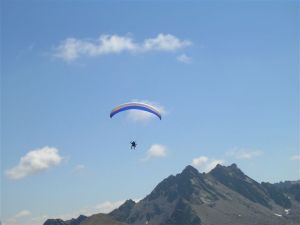 People ask what they need to do to prepare for hike and fly. I am usually a little reluctant to respond, because it’s too open a question and it also involves a lot of personal decisions. General suggestions are difficult to make because the environmental parameters, desired comfort levels, and trip objectives, personal preferences and experience all play a role. Navigation is one key aspect, especially for xalps where we have some rigid objectives (seven turn points) but also many route choices in between.

The hardest part of the route? This is always completely weather dependent. To this end I’ve improved my understanding of weather while studying meteorology. While my understanding of micrometeorology was already very good, learning more about the synoptic scale and upper atmosphere has helped tie everything together and given me some new theories to play with. The European Alps is often dominated by local effects and spending hours looking at maps helps to get an idea of what to expect. Having said that, it has happened before that a meteorologist has got the forecast wrong!

Click map for the full route, or see my screenshots

Stage 1: Salzburg to the Gaisberg 5 km 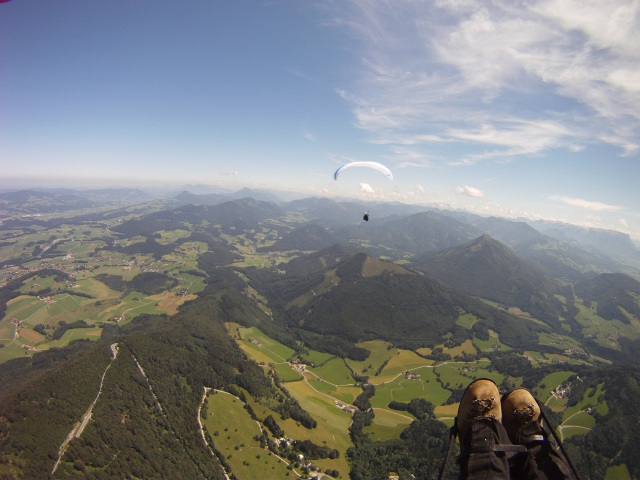 Flying the Gaisberg with James, July 2011

After enduring a week of meetings and warming up on the prologue we will all be keen to get going. Most will run more than they thought they would, swept up in the excitement. Weather will either be good, marginal, or unflyable. On a good day, it’s best to be just a little conservative to be sure to stay airborne all day, as I learned last time. On a marginal day, timing may be more important. On an unflyable day the mind can have a rest, the supporters are quietly relieved, and the legs suffer. 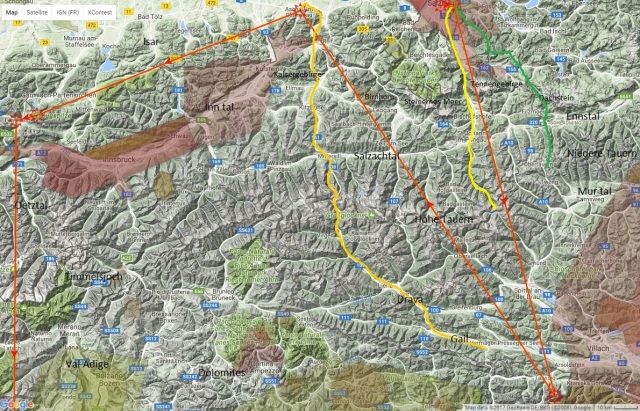 From Salzburg, on foot (yellow) the best route follows valleys (Salzachtal – note, tal is German for valley) reaching the main divide (Hohe/high Tauern) at around 2300m close to the lake Koelnbreinspeicher. If the flying conditions are marginal – for example, overcast skies and passing showers – then it might be tempting to follow these valleys rather than risk falling behind the pack by climbing into the hills.

Years ago I was stuck in the Steinernes Meer (west of the Salzachtal) with nowhere to launch from on the high limestone plateau. It’s beautiful but generally slow going in the high country. In 2009 Lloyd Pennicuik pulled off an amazing flight, sleeping on the southern edge of the mountains and launching late to fly past competitors that had been walking all morning beneath him on his way to the Grossglockner. So it can pay off, but at this early stage of the race many will be anxious to feel like they are making solid progress rather than going off course and parawaiting on a hillside.

On a good flying day there is the issue of Salzburg airspace. Pilots have been disqualified for this on the first day and I had a scare in the last edition. North of the Tennengebirge it is 6000ft, rising to 8500ft in the northeast. It’s still possible to make a crossing below this height but airspace can be avoided by taking the Dachstein route (green), making a beeline for the Obertauern pass (1700m) on the main divide. 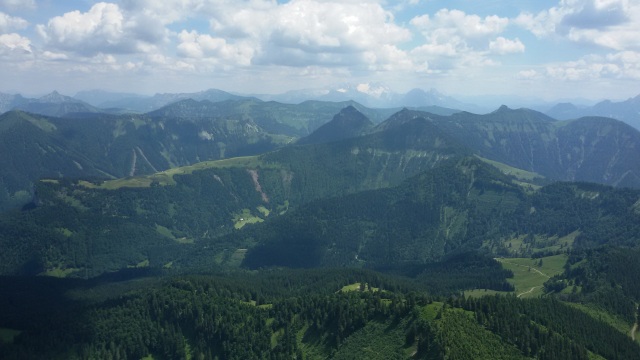 Flying to Dachstein during pre-race, 2015

At about 80km along the course line the divide would be reached in the mid afternoon on a good day, but without cross country flying conditions, you’d expect the divide to be reached early on day two. From there it’s a similar distance south to Triglav, accessed through Italy and just inside the Slovenian border. Access is restricted in the Triglav national park and landing is not allowed. The turnpoint at the official Mangartsko sedlo take off may be passed in the air. Annoyingly it is located on the southern side of the ridge – I will have to find out the details at the pre-race briefing.

The area south of the main divide is new to me although I have visited Slovenia with Ben in 2014.

Slovenia – climate and scenery not dissimilar to Austria

There are a wide range of route options for this leg and no airspace issues (just a small area west of Saalfelden). The main divide rises in the west towards Grossglockner, where we spent some time while following the 2011 X-Alps. North of the divide is a famous racing valley where you can do 100km out and returns from Zell am See. This is where I met the depressed German who said it had rained every day for the past month, and I opted for a hike and fly near Krimml / the Gerlos pass instead (close to Mayrhofen in the Zillertal).

On foot the likely route curves to meet the Drava river near Lienz and Greifenburg, crossing the main divide to the west of Grossglockner. Again there is a temptation to keep walking on marginal days with only a single 2500m pass to deal with.

Approaching the flats involves afternoon valley winds and typically more stable conditions and will possibly make it difficult for leaders to break away. This is compounded by the ridiculous choice of turn points in the valley floor. In the excellent weather we had in 2015 the leaders were able to reach Aschau on the first day, with the Triglav turn point it is conceivable for it to be reached on the second.

Aschau is also known as Chiemsee (the nearby lake), or Kampenwand (the paragliding take off where the turn point was previously located). Just south of Aschau is Koessen. 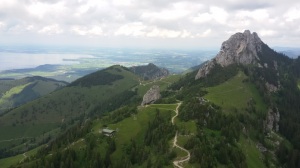 The same leg as the previous edition. With stable conditions followed by a cold front it took me two days and a night. A couple of weeks earlier I’d flown most of it both ways in a single day (see Louis’ video above). You can follow the pre-alps soaring the valley breeze, follow the Inn valley (watch for airspace), or take a line through the middle.

Again almost the same leg as last time, but extended to omit the most interesting turn point of 2015, and introduce a new one surrounded by deep U-shaped valleys howling with winds and full of hazy stability. The stupid life jacket rule might also make the logistics interesting.

I’m quite tempted to make a big dog leg out to the Dolomites, just for the scenery if nothing else. The dynamics of the diurnal thermal valley winds in the Adige will be interesting to work around, and maybe best avoided as much as possible. There have been some studies done of the valley winds which flow from Lago di Garda over a pass and into the Adige, with Trento sometimes subject to down valley gusts during the day.

This marks the half way point of the race, and the last of the silly turn points. After this it’s just the Matterhorn and the beach. 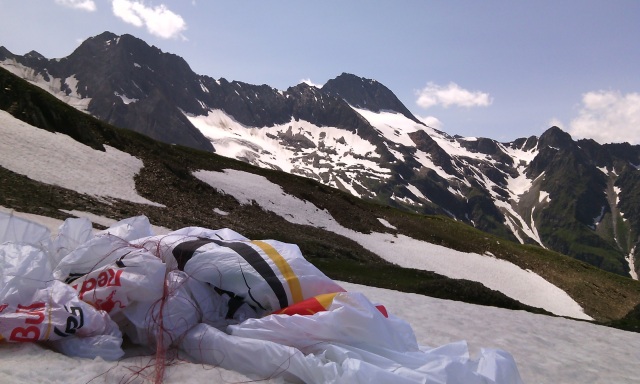 The last part of the race is somewhat baffling. It seems as if the course has been designed to handicap the Swiss, with their country bypassed altogether. What’s more, after the “traffic light stops” earlier in the course, much of the last 500km of course line is over the Italian flats. In the South African X-Berg cyclists are permitted to enter, and it’s clear that they would be advantaged on the 2017 route even in good weather – there just aren’t many high passes that you need to cross. If I found the idea of running along the highway appealing, I’d consider taking an ultralight flying set up for this years race.

Storms in the Italian pre-alps, flying with Louis June 2015

It’s much more my style to get into the high mountains, so venturing north away from rabbit country is a tempting proposition. The big risk is the high glaciated mountains around the Matterhorn. They cannot be crossed on foot without a mountain guide according to the rules, which could make logistics difficult. Going north into Switzerland wouldn’t add a huge distance onto this leg, but given the next leg is almost due south you would be in trouble if you got stuck. Crossing by air is possible but not something you’d like your plans to rely on.

The mountains on the Italian side are nothing to be sneezed at, however. It’s more a question of the airmass. In the stable airmass days will start later, hazy inversions will limit the thermal height, maritime humidity may lead to thunderstorm activity, and the long deep valleys will feed fresh valley winds into the high alps. Pilots are making some great flights at the moment but the cool spring airmass and alpine snow cover may leave them with a different impression to what we see in July. 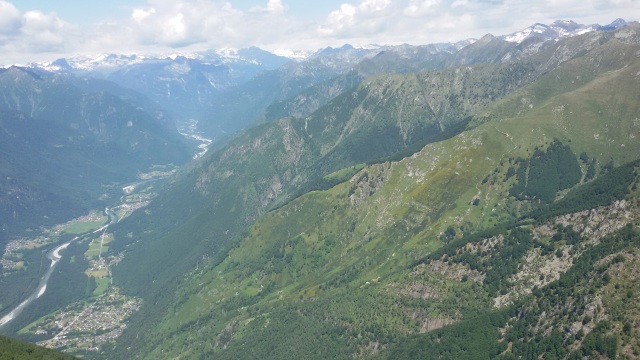 Having complete route choice freedom for the French leg is great, but there’s a catch – airspace. Unfortunately we have to abide by Paradiso and Mercantour airspaces, which are seriously inconvenient. As for other airspaces I’m still not sure.

In the Ubaye, looking north (near French Italy border) August 2011

I’ve done a reasonable amount of flying in the French Alps but the terrain closest to the course line is the most unfamiliar for me. It will be good to see some new country and interesting to form a strategy. The key is figuring out when to make a break away from the humid stable maritime Italian airmass.

The French Alps offer generally reliable conditions, particularly in the south. Here night passes may be of use, but it’s almost best not to have one. The terrain is awful for travelling by foot and you have to get pretty close to Monaco to justify walking, rather than waiting to fly the next morning. Last time I finished in really good shape, but I don’t know how much there is to be gained from pushing harder on the ground. I prefer to find that sweet spot where I move at a reasonable speed without undue physical cost. It’s common to have close finishes here though so it will be exciting to see how it unfolds.