I allocated a few days to this mission in tropical Bali amongst the warmest oceans of the world in what was supposed to be the dry season (July). Arriving at Denpasar it was hot and humid and huge wafting cumulus filled the sky, blocking the sun and slowly moving the moisture through the atmosphere. I was tired and sick and I’d just stumbled out of the airport into densely populated Kuta without any firm plans so I found a cheap room for the night literally walking distance from the airport and went to the beach for a swim. Nice waves and the odd bit of plastic brushing past your leg. If I squinted and the clouds were in the right place, I could see the hazy cone of the Agung volcano in the distance from the surf.

I was surprised and slightly guilty to see that the next morning in Kuta Bali was clear and fine. I had needed a good rest though, and without resorting to tourist priced taxis I’d needed to wait for the bus. I took the Perama bus out to Padang bai, since it was two hours closer to the mountain. It was also the ferry terminal to Lombok and I thought I might hire a scooter from there, but in the end I decided against it so I had total freedom over where to fly to.

After a swim at Padang bai (I spotted a turtle close to the beach, not to mention, rubbish), I bargained a moto-taxi to about ten euros and we rode up to Besakih temple in the late afternoon. This is not the highest starting point but the temple is at 1000m altitude with a good track and I avoided paying any fees (at least after hiring a sarong I succumbed to no further trickery). A little further east you can get to 1500m altitude but there lurk the highway robbers, without uniforms or any identification, that wield machete’s and demand money equivalent to a night in a cheap hotel.

I had eaten lunch at a rather dodgy hole in the wall in Padang bai but I was most surprised to avoid Bali belly in Besakih after being served cold pre-cooked noodles directly to the plate from her filthy hands. Even the locals were opting for the consumer packaged noodle option. Despite an iron stomach I felt awful ascending the steep slippery track into the night, the oppressive humidity giving way to thin air. After six hours or so of struggling upwards I reached the summit ridge and set up my bed just before midnight. Much of the climb was under fairly dense foliage so I could have started a little earlier in the shade. There was no water and I carefully rationed the half litre I had left.

Climbers on the summit

As the night drew on, I felt less sorry for myself and actually felt pretty lucky. In my audio diary, “clear skies, the odd shooting star and flash of lightning in the distance, and the lightest breeze.. it looks like it might happen. It’s going to be an amazing view tomorrow”. Shortly before dawn the first climbers shuffled past and as the sky lit up I got busy with the camera.

Biv on the summit ridge

My pack on the summit 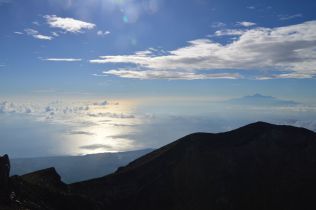 With active storms within view, a dawn shower close by, and a blanket of low level cloud intermittent below, it was risky to shun the light winds coming up the face and delay launching. I stuck to my guns though, dozing in the morning sun and checking the crater from the summit – I was greedy and I wanted thermals. From ten thousand feet you can glide a long way so I had many options up my sleeve, but I knew I was lucky to be able to fly at all. Only a few days ago a friend had become engulfed by cloud even before dawn and had to carry his glider down. 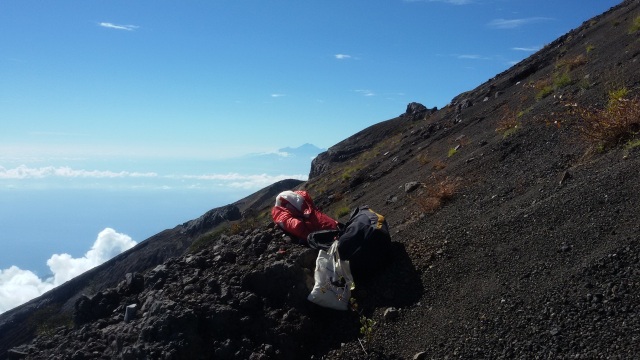 Rinjani views from Agung take off

Finally I held out until 10am. Quite a good day for the summit to still be clear at this time – later in the week I had my eye on Rinjani, which was nuking by then and producing some pretty impressive storms during the day. The winds had picked up since daybreak but the strength was perfect for pulling the wing up. I chose a place on the north face near the west peak with loose scree so I didn’t have any problems with my lines catching, and went down off the ridge to make sure I had room to move. I was quite nervous but I think that’s excusable when alone on a high peak in an unfamiliar place. The take off was straight forward. 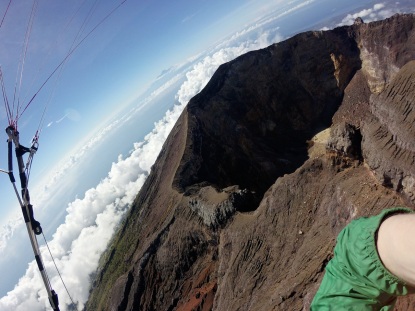 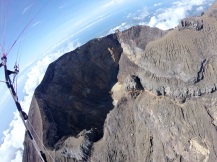 Agung from the south

View into wind (toward Karangasem)

The wait was worth it and small thermals rising up the northern face gave me height to peer down over the summit and deep into the crater. I possibly should have lingered longer, but instead pushed on to the eastern spur on the other side of the crater. Here the wind was sliding around the volcano and I lost a lot of height coming back and wasn’t able to recover. I still had plenty of height though and decided to make a dash for Candidasa, the popular coastal paragliding site not far from the ferry at Padang bai. 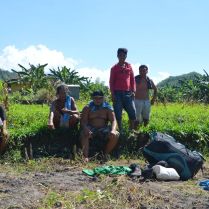 The volcano spat me out with ground speeds of over 45 knots. I gained some height downwind at the convergence and then followed a lifty line out towards the coast, passing Balinese farms, forests, and my brocken spectre over clouds. It was white capping strongly on the coast and the beach was narrow and rocky so I opted for a nicer place to land a short walk inland. Friendly locals gathered around as I packed up. From here I politely declined moto-taxis (providing they offered less than three times) and took a scenic walk back along the black sand beach, after asking for water from the construction workers nearby. There was one final obstacle at the end of the beach which required some investigation but was traversed without further problems.

Finally a pleasant walk into Candidasa and a hot lunch and a cold beer. It was a nice feeling to look back at Agung as I crossed the Lombok strait on the ferry the next day. 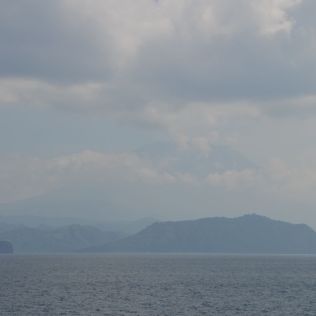 Agung from the Lombok strait
Advertisement