Wow, it’s been four years since I updated my gear list. It is one of the most common questions people have. Usually I tell people that I am the last person to ask about gear. Usually I’m happy flying just about anything, and I just get the cheapest stuff when and where available, or simply do without – being resourceful is part of the fun. Having said that, just a few days ago I was reading some old diary notes from over a decade ago – and that certainly made me appreciate how much better the gear is today.

As part of my participation in the Red Bull X-Alps, I am really excited to get hold of Ozone’s latest gear, which is really a step up in terms of what is available for vol bivouac. A two liner is not everyone’s idea of a safe mountain wing but the Ozone zeolite handling is apparently amazing and they’ve managed to get it to weigh under three kilograms – quite incredible! There are plenty of other lightweight wing options – talk with your instructor.

Ozone is also supplying a new lightweight harness which apparently has comparable storage to my existing Ozium 2. I’m sure it will be comfortable enough (I’m not fussy and I’m used to being tossed around in a hammock), but the main thing I’m worried about is durability. My gear is well used in the mountains and tends to get completely trashed. It’s worth considering getting something a little more durable.

With the backpack and lightweight reserve parachute, the total kit is apparently under 5.5kg (12 pounds). Last X-Alps the Zalps wing (4.36kg) made a heavier package and that was my excuse to avoid running most of the time. I might have to do a bit more ground work this time. By the way, I stand by my choice to get the Zalps, which I had very little chance to fly before the 2017 X-Alps, but it has been brilliant to fly and I now find it hard to go back from two liners. 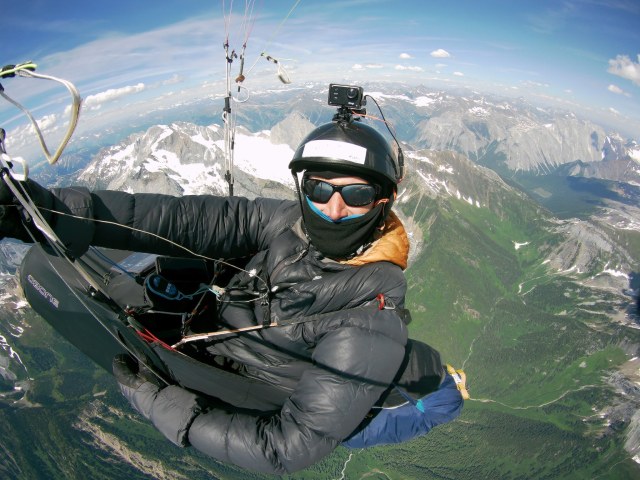 Light bulky items hanging (via gear carabiners) off the back. Canada Jul’18

Backpack tip: consider one of those drawstring wing bags to protect the straps and fragile material of your lightweight backpack if you have to check it in on airline baggage.

Yes I suppose protecting your head is important (your spine is more of an issue though in paragliding), but I joke about the helmet being a camera mount. Of course this is dangerous – you can get lines tangled – so as usual don’t follow my recommendations.

Making videos is a really fun part of flying for me. It means I get pseudo “airtime” as I go back over my flights, and it’s fun to share the adventures. I’m using a cheap version of a gopro (same form factor so you can use the same mounts). It is a gitup2 which I mount in a non-waterproof case that allows access to the mini-USB port so I can plug in an external mic (just a cheap one off ebay etc). I have a lanyard attaching my gitup2 to my helmet, and I run the mic along the lanyard and tuck it under my neck warmer against my throat. This lets me record without wind noise, although sometimes there is a shuffling sound as I turn my head.

I used to spend $400 on heavy leather mountaineering boots, but I find that boots tend to wear out at a fairly steady per kilogram rate. The boots I got from Decathlon in China for under $20 lasted just as much as any other boots. Comfort is the other factor – of course – but socks and keeping the feet dry is also a factor here. This is definitely something you want to figure out over time rather than checking my blog just before starting out on a big trip.

My boots in Cochamo, Patagonia, Nov’15

Use synthetic fabrics and wool rather than denim and cotton which absorb water. I am quite fond of my thin xalps tshirt because it is so light. I only have one lightweight spare set of clothes, I can wash the clothes I’m wearing, squeeze them out, and wear them dry.

Flyskin has provided me with a layer system that has some nice design features. On the base layer, mesh on the back and around armpits to avoid sweating (or be quicker to dry). Long sleeves with thumb holes so they don’t slip down your wrists when you’re flying. The mid level layer is mostly wool and has an angled neck zip which is comfortable and effective for regulating warmth.

Big backpack – but there’s an aircraft and my home inside. USA Sept’18

I usually avoid suncream because when flying I completely cover up with a neck warmer and belaclava next to my sunglasses with NozKon nose shade attached.

It depends on where you are going obviously. But lately I’ve become soft in my old age. I’ve slept a few hundred nights in NatureHike tent which is of excellent design and only weighs just over 1kg. It is two person and was an asset in the Canada trip where I’d set it up straight after landing and jump in with my pack to avoid the summer bugs. It is also a handy shelter for thunderstorms and I’ve even taken it so the snow (we woke with a dusting of snow on us, sifted through the flyscreen). I bought it for little over $100 from aliexpress.

I also picked up $50 airmat – half length – from decathlon, and a $20 sleeping bag. Sometimes it’s worth bringing some woolen socks. But all this is completely dependent on the type of trip you are doing.

The tent set up can be quite good since the paraglider canopy, folded like an accordion, traps air (as it should) and is a very effective blanket. If it’s on top of you, and protected inside a tent, you should be able to avoid damaging it – and avoid the wind blowing it away!

When not that far is far enough – I started out with characteristically optimistic plans and was a little slow accepting reality – finally having 9 flights in a day and a half! I chose Hanmer Springs because it was the closest place I haven't really explored. Here the moist coastal airmass meets the drier interior. There's a window between low morning cloud and low evening cloud it seems, I didn't manage to get far but had some interesting scratchy saves in the hills. A great camping spot right next to landing / take off the next morning and for the first time I used this wing as a blanket – fold it properly and it's really warm!

I’m still using my SPOT3 for satellite tracking while flying. Regrettably the subscription price has gone up but satellites are expensive, and it’s still competitive. The alternative inReach has two way communication but it’s important to realise that there are still situations in which you actually have to be responsible for your own safety, and no one can help you. The key to me is to save an impossible search and rescue, and to avoid any guilt about people worrying about you – you can let people know you’re ok out there. It’s also like having a friend with you, but it won’t always save you – safe decision making is still the most important thing.

Phone: I just bought a Moto G6 play. Under $250 and I’ve had several Motorola phones now – this one has a great feature where you can twist it back and forth to turn the camera on to save you fiddling about with gloves. I am running xcTrack or xcSoar on android and I’ve set it to geotag photos, which are then synced with google photos. It’s great being able to search for photos by location although it’s very limited when the place doesn’t have a name google recognises – the need to allow latitude / longitude and a radius.

Lately I’ve been using the app Soviet Military Maps, which are worldwide. The interface is simple and effective (especially coming from OruxMaps, with its difficult to read vector maps), and you can cache a variety of maps including satellite imaging and easy to read contour maps. They still need to make it easier to read altitude on the map though. I also bring paper maps to have an overall perspective to plan flights. Before the trip, XCPlanner is good but better on a large screen.

Vario: I’ve been using the skyDrop which is light with good battery life, but has a readout so you don’t waste phone batteries checking things on the screen. I can keep it topped up with the solar panel when flying – the disadvantage of charging the phone is if obscured by cloud the charging interruption can make the phone screen turn on. For xalps I’ve picked up a xcTracer FLARM, which is an amazingly light set and forget unit that has its own solar panel to keep it going. No readout but incredible battery life, and the FLARM system will help reduce the risk of flying into hidden cables in the Alps.

Back up your life! Whenever I can I leave copies here, there, and everywhere. Redundancy is key. I don't edit everything and I publish even less but some editing is needed to "keep you honest" so you try to keep the quality up and the quantity down. Still, after a year travelling there's plenty to get through until I'm organised. Reviewing it will help me learn and get me excited all over again. It can also be a bit daunting, but there's some sensational stuff in there!

Insurance: a “moving target” it often requires you to be a resident of a certain country. For kiwis, check Paraventures. For other companies, check the policy for gliding, competition and race, and you’ll find you will probably be excluded. Remember that insurance doesn’t make you safe – it just means you’re less of a burden on others if something goes wrong.

That’s all I’ve got for now, I’ll try to add to this page when I get questions.